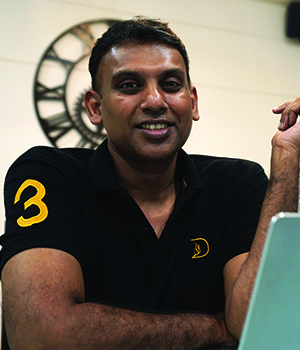 Mitul Gada completed his formal education from Somaiya college in Bombay and had started giving his services to Institute of Management Studies (IMS) as a freelance faculty for math and logic right from the second year of graduation....

As a student, Mitul used to hate math and always used to run away from it as none of his teachers ever bothered either to teach math conceptually or to develop his interest in the subject. As a result of which, he flunked in Math in his 11th grade. But later on while preparing for his entrances, he saw and realized the ways in which the concepts in math can be disintegrated and taught in unbelievably interesting ways. Following which, he fell in love with math and decided to teach math in an innovative way.

He started teaching math and logic for CAT and GMAT in IMS in 2001 and continued his services till 2007, where he also used to train potential IIM students for their group discussion and personal interview. In past, he has also trained IAS / IPS aspirants.

Mitul’s USP. lies in his unique teaching method where the emphasis is given on the concepts in depth rather than the theory associated with the topic. His smarter and shrewder approaches (substitution, back solving, approximation, oral calculations and visualization) help students tremendously in coping up with regular as well miscellaneous math topics. (permutation and combination, probability, coordinate geometry, mixtures and solution, rates, trigo, functions etc).

His rapport with the students, sense of humour, presence of mind, and regular follow-ups keeps the ambiance pepped up.

Mitul was also associated with "The Times of India" and "Mid-day" for 3 years as a freelance journalist and had written several social and career based articles. Currently, he is writing a book on the fundamental of mathematic named “Math, my love”.

So far since 2001, he has trained more than 12000 students and has send several to the top b-schools in India and abroad. The count is still on...